I'm a skinny girl, but not a healthy girl. My resting heart rate is in the 90s, I have borderline high blood pressure, high cholesterol and a kidney disease. This is my quest to get healthy, but I know I can't do it alone, so I am building a village of supporters through my blog.

In remembrance of Emma

This past week we received one of those middle of the night phone calls that comes with bad news. Our cousin's daughter had passed away earlier that day unexpectedly from complications of peritonitis. My head couldn't quite comprehend the news, even as my heart immediately ached for her Mom and family. None of us expected that call, yet we weren't necessarily surprised by it either. Emma had spent  her short time on earth bound by a body that failed her, and I had contemplated that she might leave us too soon.

Emma was born the year after my youngest daughter was born. We were fortunate enough to be stationed on the same side of the country as her parents at the time, so we were able to visit her soon after she was born. She was this tiny little dark haired sweet infant girl with soulful eyes who captured my heart the first time I held her. There was nothing that pointed to immediate problems, but as the months passed, Emma didn't hit those developmental benchmarks that the doctors look for. She began to manifest more serious medical complications, and her Mom started chasing answers, therapies, specialists, and hope. Months turned into years, and it became evident that Emma was on a journey very much her own and would develop and progress in her own time and way.

Because of her special needs, Emma didn't travel often, so we only managed a few visits with her over the years. After I received the news, I started making phone calls. Thee first calls were to my daughters. I was expecting them to be upset, but I considered the possibility that they might not have enough long term memories with Emma to feel the loss as deeply as I knew her local cousins would. I couldn't have been more wrong; they both melted down at the news. As we talked throughout the day, they shared memories of Emma and her sister, Eleni, that I had never heard. We laughed, we cried, we contemplated why, and pondered all of the things you do when you lose someone so young and so suddenly. And as I went to sleep that night night still thinking about Emma's life, it hit me. This was Emma's gift. You didn't have to know her long to fall in love with her. She may not have had the ability of speech, but she had an incredible capacity for communication. She could reach into your heart without uttering a word.

As we say goodbye to her, I find myself conflicted. I feel pain from her loss, but if I am honest, I also feel a sense of hope. Emma spent her years struggling against a body that didn't work for her and living in a world where most people measured her by all the things she wasn't able to do. In my heart, I know she is in heaven free from the physical constraints, embraced and welcomed by all around her.  As my daughter Charlie so aptly said to me,  "Emma's not Resting in Peace, She's Running in Peace. " Run in Peace dear Emma. We love you.

My Brother, His Mission and Redemption Village 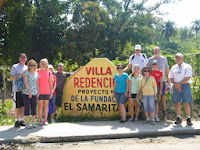 We parked the car at the front of the village. As I stepped our and scanned my surroundings, the  first thought I had was that I had never seen this kind of poverty up close. I had driven through slums in DC. I had seen pictures in National Geographic or a documentary on TV, but I had never walked side by side with people who had so little. All around me were tiny one room shacks housing multiple families. Most had no electricity or modern plumbing. As we moved through the village, a group of children started to form around us. They reached for my hands or simply tried to touch me as I walked by. The further we walked, the more I began to feel like the Pied Piper of Hamlin as the group of children continued to grow around me. I was surrounded by beautiful little faces staring up at me; little brown urchins covered in dirt, wearing little to no clothing managing these huge smiles in what seemed to me should have been the saddest place in the world yet somehow these children were beaming with joy.
Random thoughts kept jumping through my mind. “Where were the parents? Why were they letting these children wander off with strangers? How were children able to survive in these conditions?” I watched as my brother and sister-in-law moved through the village with ease stopping to check in with family after family to see how they were doing. Within the span of a half hour, my brother was presented with multiple requests for assistance. One person had a kidney infection, but had no money to see a doctor. By that afternoon, Rick had arranged for a free appointment and funds for medicine. Barb, my sister-in-law and truly my Brother’s rock, introduced me to a tiny little baby who was failing to thrive. The Grandmother who was raising her had been thinning the formula to save money. Barb had arranged for free formula to be provided to the family until the baby was able to reach to a healthy weight. I didn’t know it at the time, but I was actually meeting my future niece Mariflor who was abandoned by her family shortly after my visit.  The requests continued and so did the solutions. I was overwhelmed with the need, and awed at my Brother’s ability to see through the chaos to a solution each time. 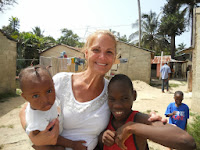 As we neared the end of our visit, Rick suggested that we purchase some drinks for the children. The money would help the local store which funded the village church, and I think he sensed I needed to feel as if i could do something to help. We reached into the packed cooler and started passing out drinks to the children. In a matter of minutes, the word seemed to have spread through the village, and the group of children swelled. We emptied the cooler and bought every drink in the store, but the children still kept coming. I was horrified that we didn’t have enough to go around. I was appalled that I couldn’t answer every child’s plea. As my brother swept me out of the store into our vehicle, I dissolved into tear’s with the realization that this was my brother’s life. Endless need, and never enough support to answer every request. I was brought to tears in less than an hour, yet my brother and his family faced this pressure day after day, month after month, year after year. I knew that only with God’s support and blessing could they possibly sustain the kind of commitment and strength they needed to face their tasks daily. I finally understood why Rick hadn’t been able to turn his back on this calling despite the hardships he had endured.

My brother is facing a critical time in his mission work right now. He needs support. His wife's father has been struggling with some very serious health issues. After a short visit home it became clear that they needed to return for a longer furlough to allow time with her father. They returned to the Dominican to get things in order there, so they could feel free to return on furlough to the states for a longer period of time. Rick has a great network in place in Sosua with key individuals who will provide supervision over the mission work while he leads it from here. Rick is going to continue to go back and forth between both locations, but it will be challenging both financially, physically and emotionally, so I am asking for your support. Support can take many forms and whether it is a prayer to lift him up, a share to get his message out or dollars to fund his efforts, any support is appreciated. Rick and Barb are always lifting others up in prayer and support, it is my turn to lift him up by requesting your help. I have put a link under my suggested links to a web page which provides more information about his ministry and ways you can help if you feel called in any way. Thanks!

A few of My Favorite Links